Blueberries are perennial flowering plants with blue– or purple–colored berries. They are classified in the section Cyanococcus within the genus Vaccinium. Vaccinium also includes cranberries, bilberries, huckleberries and Madeira blueberries.

Commercial “blueberries” – including both wild (‘lowbush’) and cultivated (‘highbush’) blueberries – are all native to North America. The highbush blueberry varieties were introduced into Europe during the 1930s.

The leaves can be either deciduous or evergreen, ovate to lanceolate, and 1–8 cm (0.39–3.15 in) long and 0.5–3.5 cm (0.20–1.38 in) broad. The flowers are bell-shaped, white, pale pink or red, sometimes tinged greenish. The fruit is a berry 5–16 millimeters (0.20–0.63 in) in diameter with a flared crown at the end; they are pale greenish at first, then reddish-purple, and finally dark purple when ripe. They are covered in a protective coating of powdery epicuticular wax, colloquially known as the “bloom”.

They have a sweet taste when mature, with variable acidity. Blueberry bushes typically bear fruit in the middle of the growing season: fruiting times are affected by local conditions such as altitude and latitude, so the peak of the crop.

Blueberry plants can be planted as close as 60cm apart which will form a thick hedge after a couple of years, but in general most fields are planted using a plant spacing of 0.9m to 1.2m between plants with spacing between rows of 1.8m to 2.8m which would result in a plant density of 3000 to 6200 plants per hectare.

The distances between the rows will depend on which equipment will be used for cultivation, harvesting and pruning. With smaller scale operations hand harvesting is normally used where the row spacing’s are narrower. Most blueberry farmers plant about 6000 plants per Ha, but some who use 25L to 28L pots or grow-bags plant up to 8500 plants per Ha for optimum production. 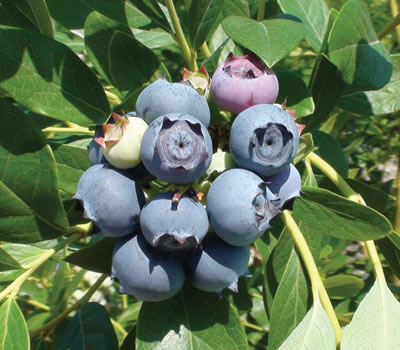 Star Blueberry Variety. Star is a Southern highbush blueberry. Fruit is large and easy to harvest because of a concentrated ripening period. Fruit has excellent scar, firmness, good colour, and good flavor. 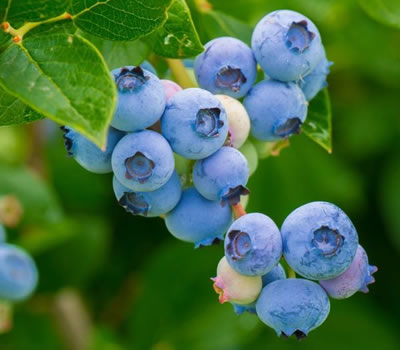 One of the best varieties for high adaptability to different climates, Legacy performs well in low, mid, and high chill areas where winters are not too cold. It is easy to grow and a heavy producer when it reaches a mature age. Fruit is medium-size with good flavour. Biloxi yields high-quality, medium-sized blueberries with a distinct and excellent flavour. This productive hybrid plant has an upright, vigorous habit. In some areas, Biloxi will produce 2 crops. The main crop ripens in mid season. 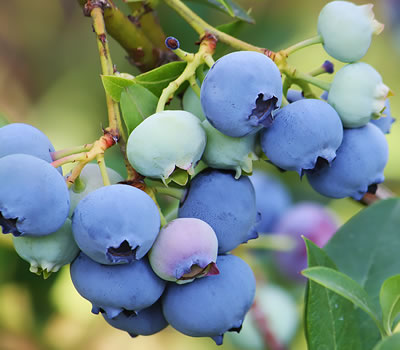 ‘Misty’ has sweet, firm berries! ‘Misty’ is one of the most attractive, vigorous, and high yielding Southern Highbush varieties, making it an excellent choice for southern climates. They can grow from 4 to 6 feet tall. Blueberry plants are fast growing and reliable.